No need for a coffee – this one’s easy.

In this post, you’ll get a solid understanding of inflation and stagflation.

Last week the US GDP reading came at a negative 1.4%. Along with an +8% inflation print, the US is now flirting with stagflation, which occurs when the economy is shrinking or growing slowly, yet the inflation is running hot.

Stagflation contradicts the classic macroeconomic textbook relationship that economic growth and inflation are positively related. As the economy expands, demand outpaces supply and BOOM! You have inflation!

In other words, “more money is chasing fewer goods”, as economic output cannot keep pace with increasing demand. It’s also commonly believed that nothing cures inflation better than a good, old-fashioned recession – the unemployed just don’t have the means to drive the prices up.

In this context, stagflation is an odd concept. It implies that prices are rising DESPITE a slump in the economy, which is somewhat counterintuitive.

It’s customary to look at price levels as some equilibrium between supply and demand. Supply represents all the “stuff” produced by an economy, and demand represents consumers’ willingness and ability to buy that “stuff”.

If the demand is constant and in equilibrium with supply, prices are stable, and there is no inflation. There’s also no economic growth, which is a hard sell for politicians. They want things to go up. 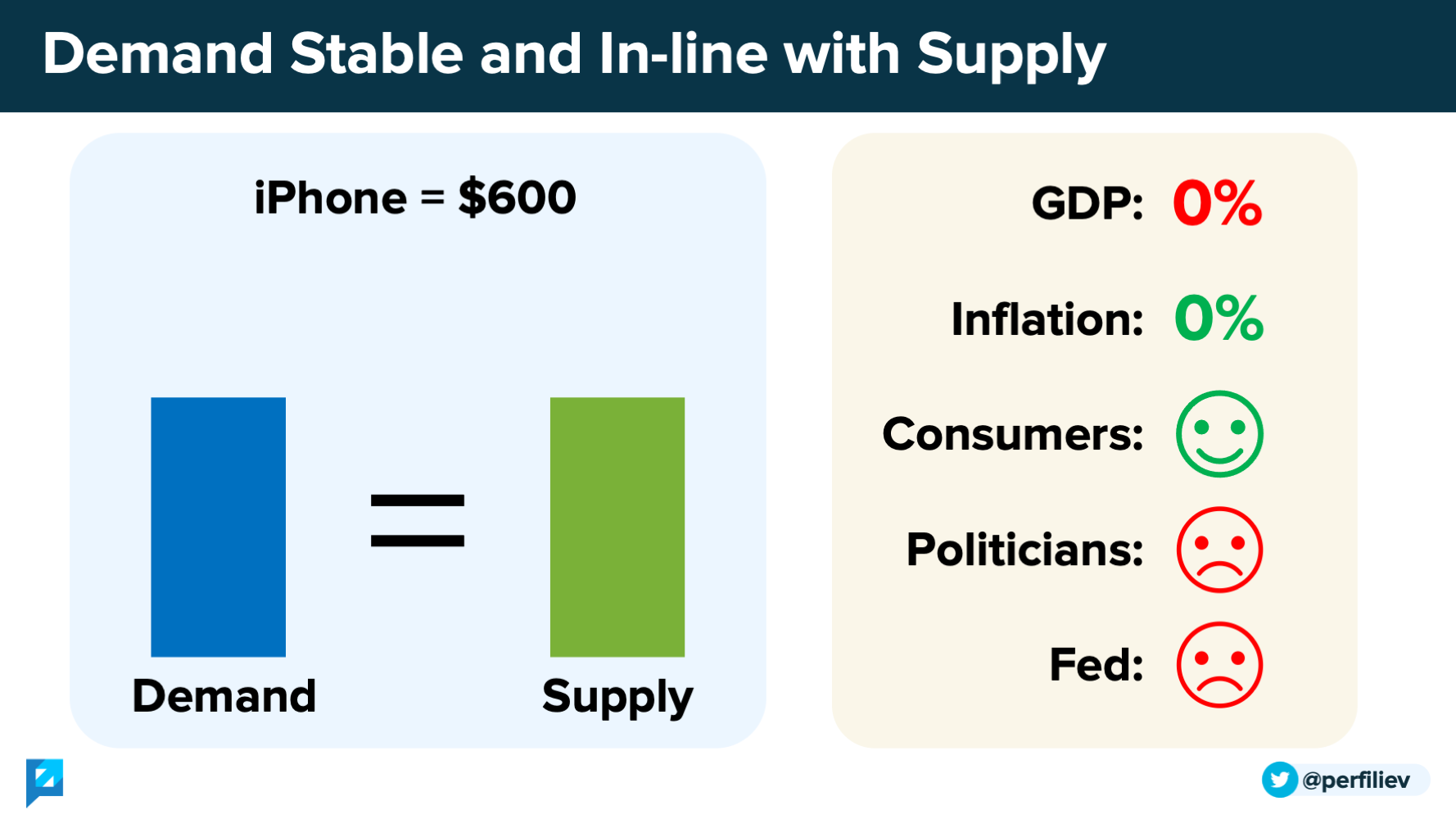 And the Fed can make that happen. The Fed can lower rates and perform their Quantitative Easing voodoo to stimulate the demand. Attracted by lower rates, consumers are more likely to buy flat-screen TVs and replace their 1-year old iPhones.

If supply meets the demand, we are in a happy place. Both are increasing, so the economy is growing. And since they are in equilibrium, prices are stable, and there is no inflation. Good stuff! 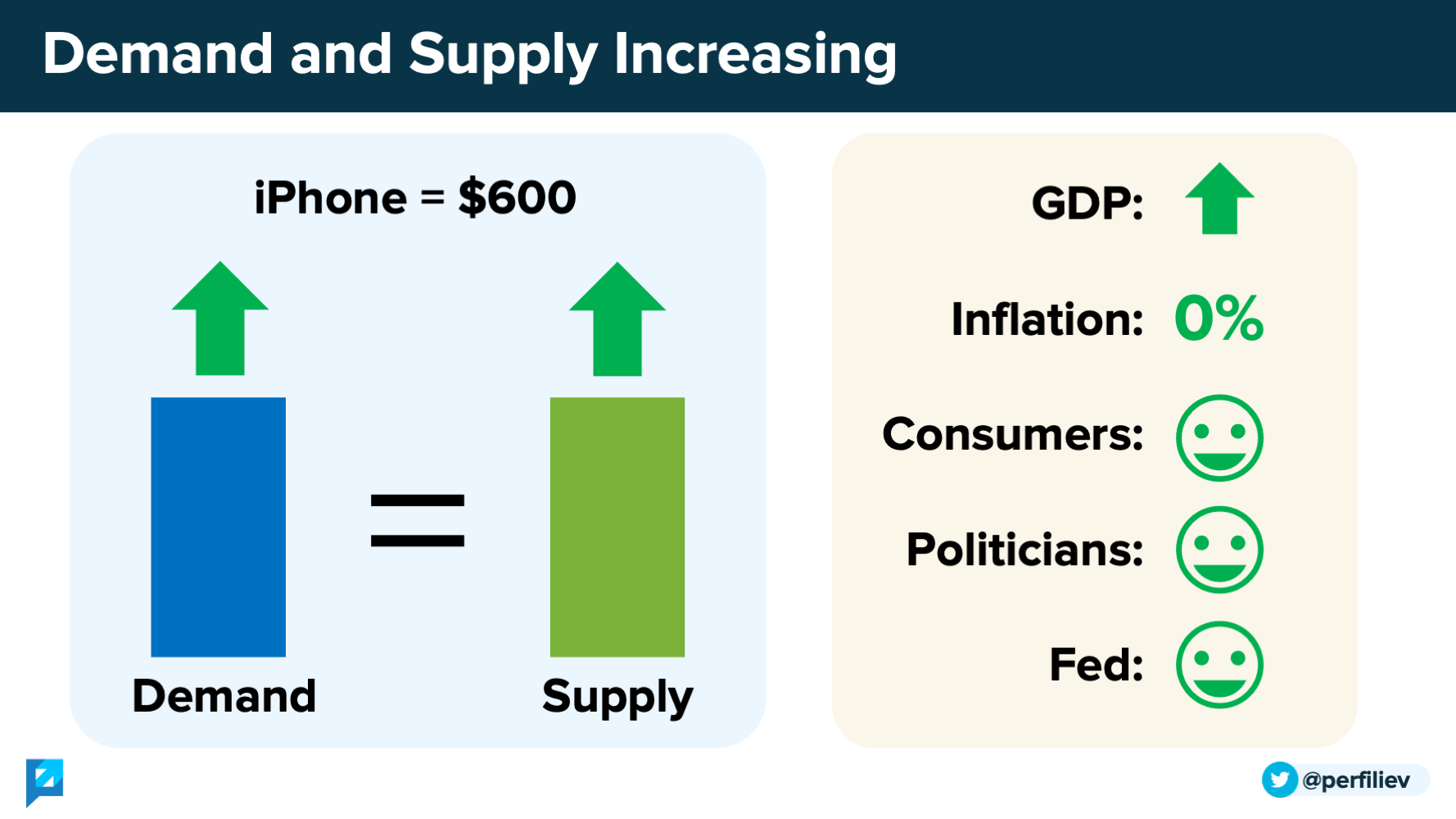 Politicians are happy and can take credit for delivering sustainable economic growth to their voters. The Fed also feels smug as they’ve nailed both sides of their dual mandate – price stability and employment.

As the demand continues to grow, at some point supply will hit the maximum output capacity – the economy simply can’t produce and deliver enough stuff that consumers want to buy. There is now an imbalance between demand and supply. 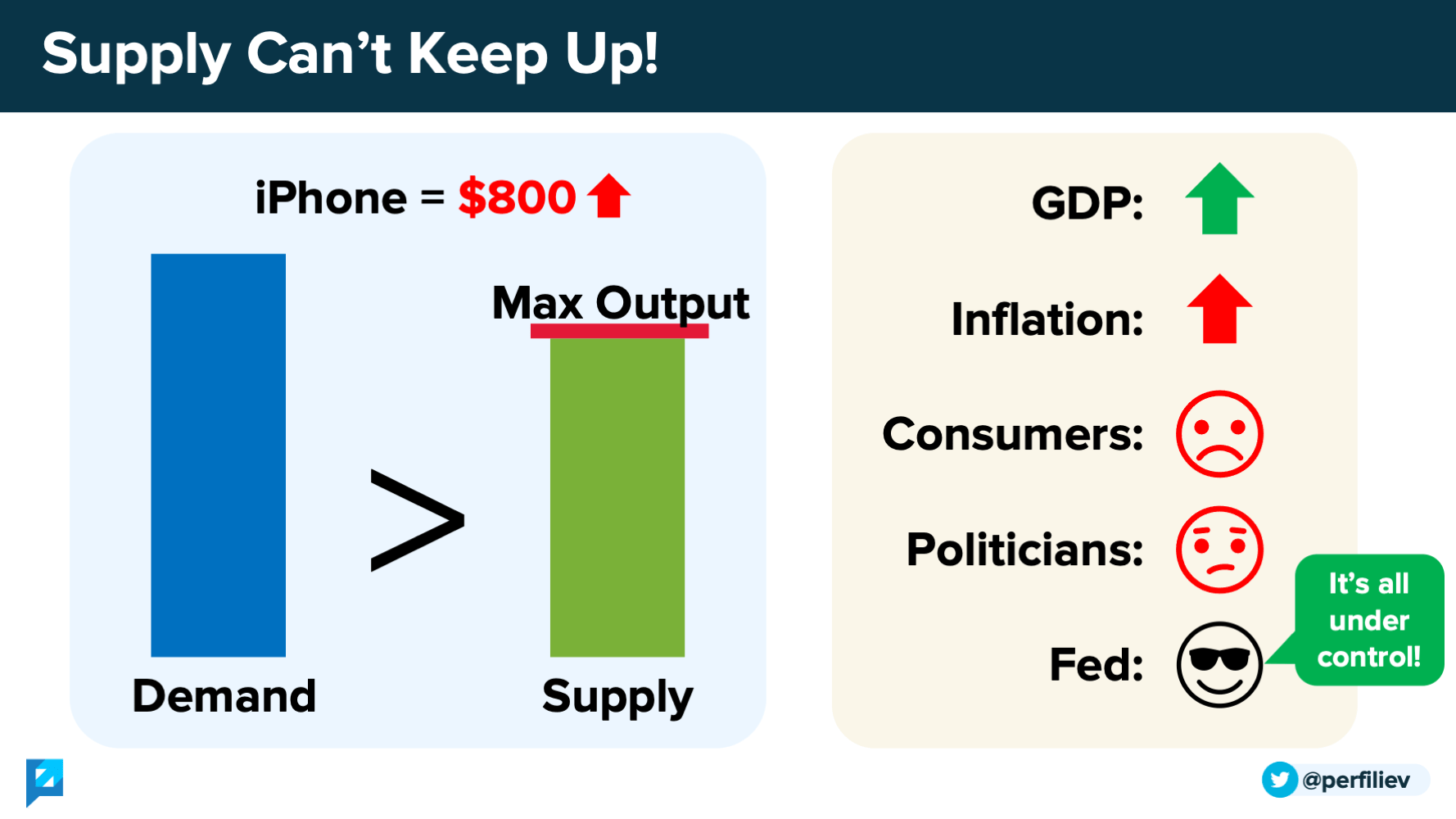 Prices rise, and you get the classic “demand-pull” inflation. Consumers notice that every trip to the grocery store is more expensive than before and ask for a pay rise. Higher wages lead to higher prices, and we get the inflation spiral.

While consumers are losing purchasing power, the politicians are losing votes (unacceptable). And that’s when the Fed steps in to save the day! Fed Chairman will calmly talk about how the economy is strong, and the labour market is tight.

They will act like they got everything under control, but in reality, they’re like, “oh my God, there’s too much demand! Shut it down! Shut it down!!! Steady… Steady! Oops! Fuck. Overdid it again.”

By raising rates and tightening financial conditions, the Fed can kill off demand and “cool down the economy”. Usually with a side-effect of a recession. But hey! Look – price stability! Yay! Sorry you lost your job. 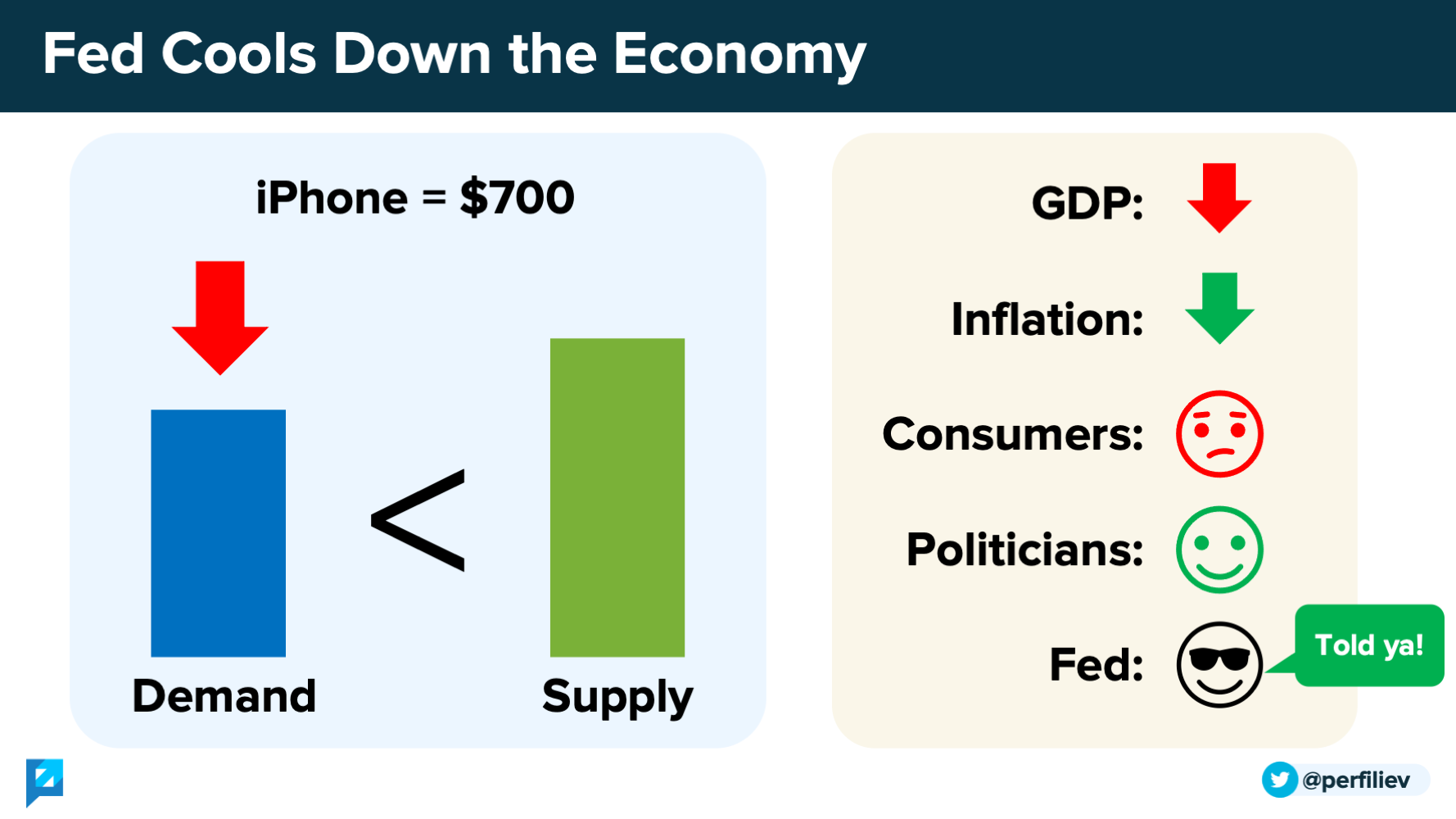 Since the demand drops lower than supply, inflation ceases to be an issue. Prices can even start falling as the economy contracts, and unemployment levels are high.

While politicians promise jobs and economic prosperity, the Fed drops rates to zero, orders a new ink cartridge from HP and is ready to save the day again.

Does it mean that inflation will always go away once we hit recession territory?

Well, that’s the thing – not necessarily.

In our scenario, when the Fed was trying tame inflation by reducing demand, we assumed the supply to be constant and stable. But the supply is fully at the mercy of other external factors, such as cost and availability of labour and raw materials used in the production process.

For instance, if there’s a sudden shortage of commodities, supply will decline. And what if it falls faster than demand?

In that case, the imbalance will still persist – the demand will remain higher than the supply, even though both are falling. That means we’re still in a situation where more money is chasing fewer goods, and inflation isn’t going anywhere. 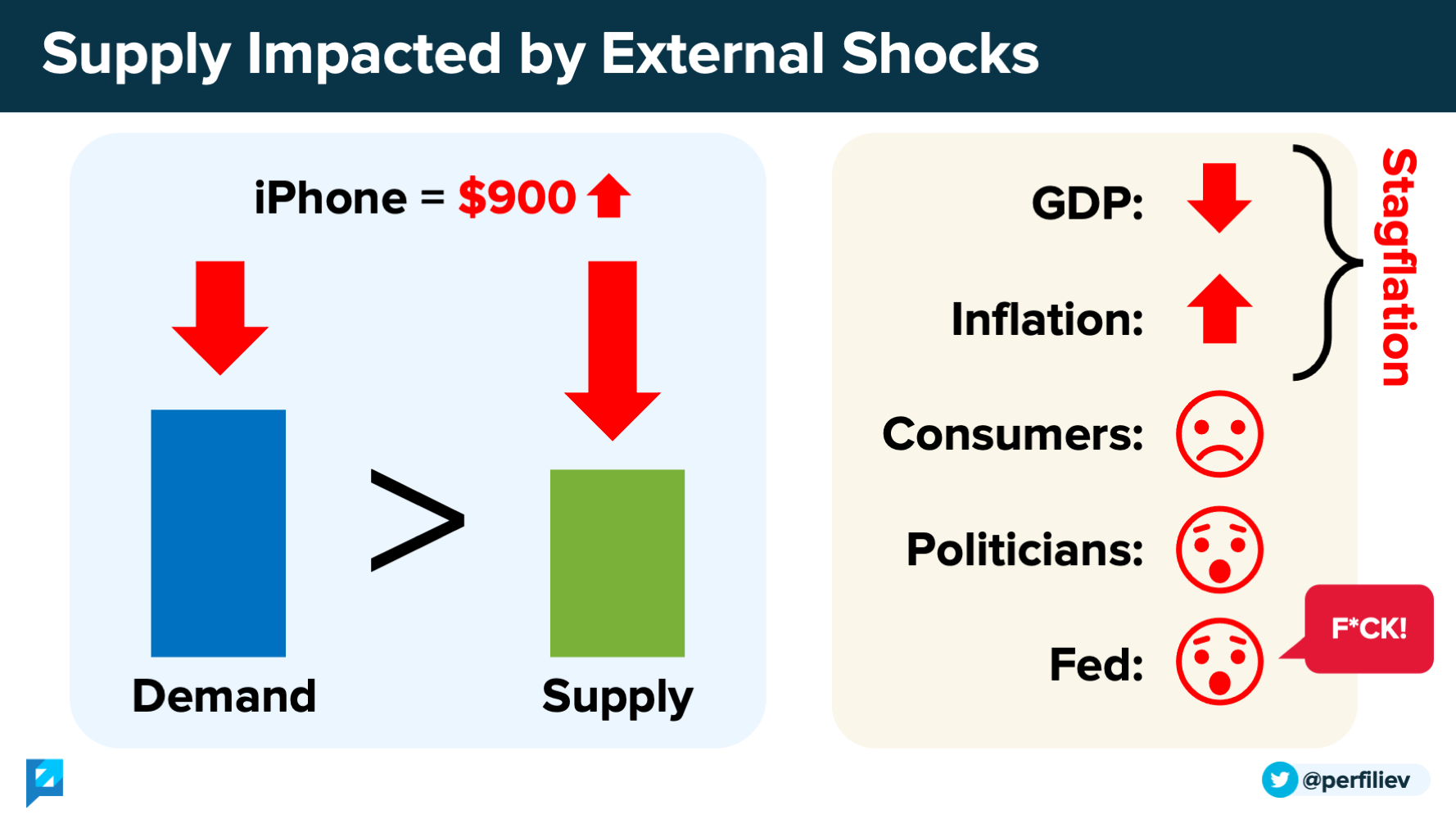 But the fun bit is that both supply and demand are decreasing, which means – dun-dun-duuuun – RECESSION! The economy is contracting while inflation is high – a.k.a. stagflation. Fed’s dual mandate is out of the window as they fail on both of their objectives. Fun times. 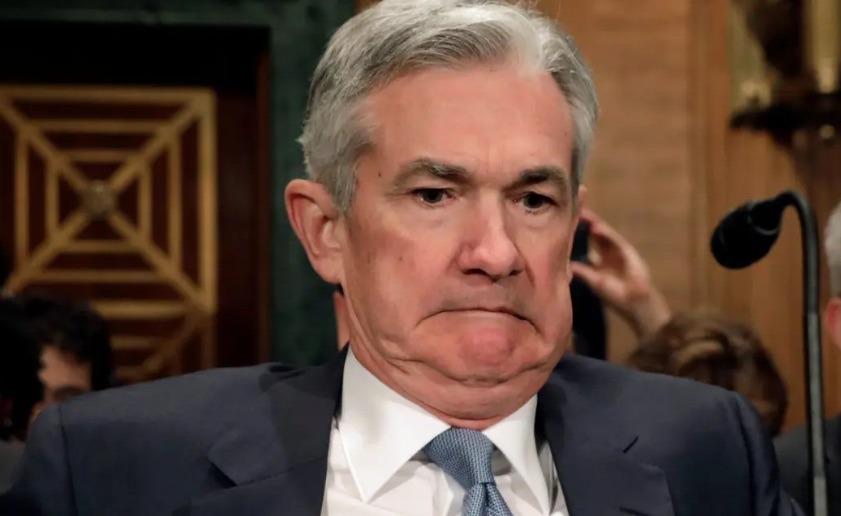 And it seems this is where we’re headed at the moment.

As much as I want to blame the Fed for sponsoring excessive fiscal spending and causing inflation, we’ve got a whole cocktail of other inflationary drivers pushing down the supply side.

All happening at the same time!

It was funny when Biden accused Putin of stirring up inflation in the US and making Americans poorer, but he’s really not that wrong. Currently, the war in Ukraine contributes to a shortage of commodities and drives up their prices.

For one, the war limits Ukraine’s ability to export wheat, corn, seed oils, and other essential foods, which got substantially more expensive in recent months. World Bank even issued a warning that there’s a risk of a global food crisis caused by the war.

Russia was also significantly restrained in its ability to supply oil and gas to the global market – and will be even more restrained in the future. Europe is highly motivated to reduce and eliminate its dependence on Russian energy and look for other suppliers.

Of course, this makes oil and gas more expensive, and it’s a significant cost item for production and manufacturing around the world.

Prices up, production restricted due to shortage, output down = stagflation. 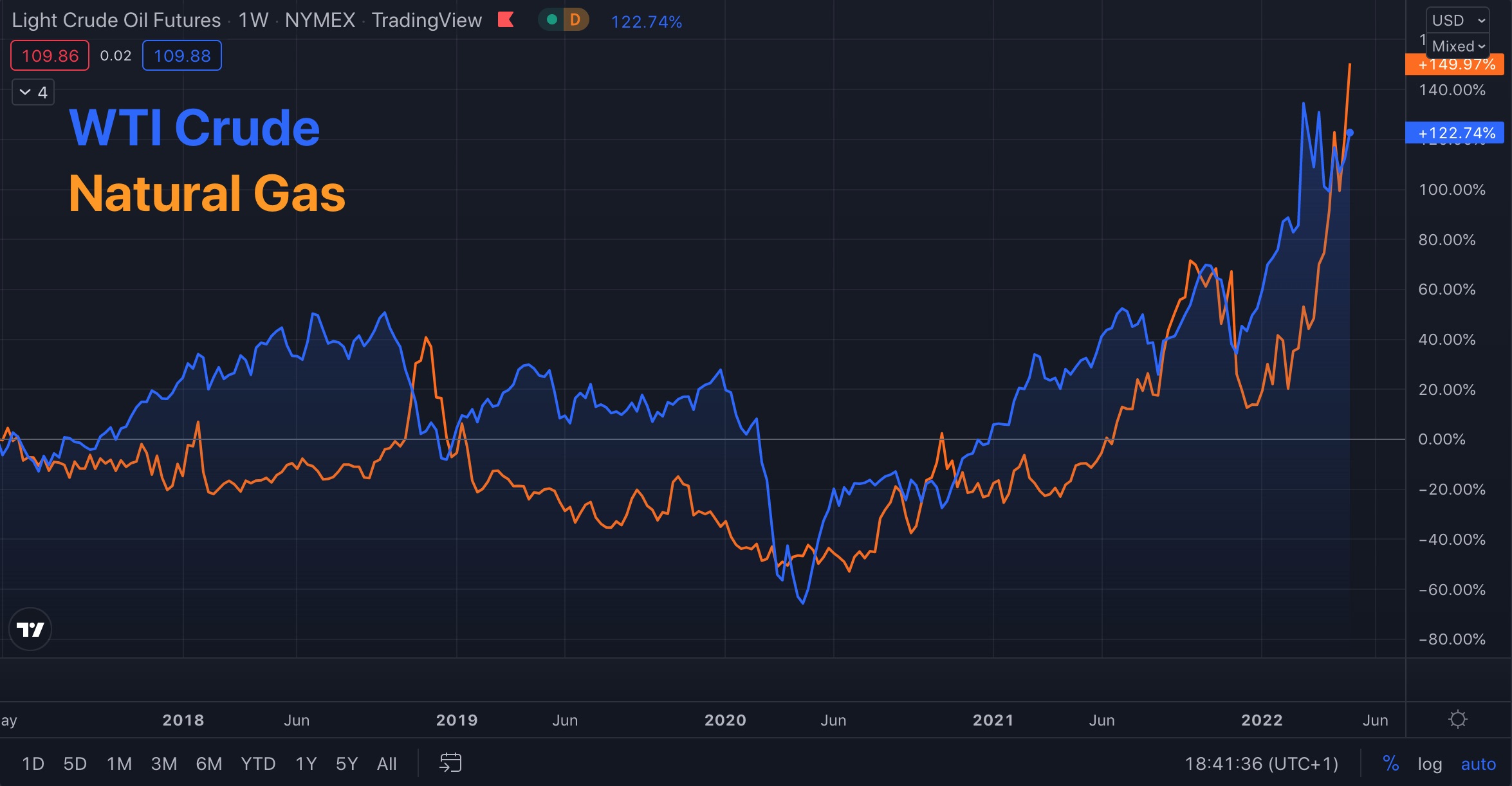 Apart from raw materials, the economy’s supply-side also faces a shortage of labour. As the unemployment rate sits near record 3.6%, the US faces headwinds of retiring Baby Boomer demographic and lower immigration. In his latest commentary, @ConvexityMaven shared a chart showing net immigration approaching zero. 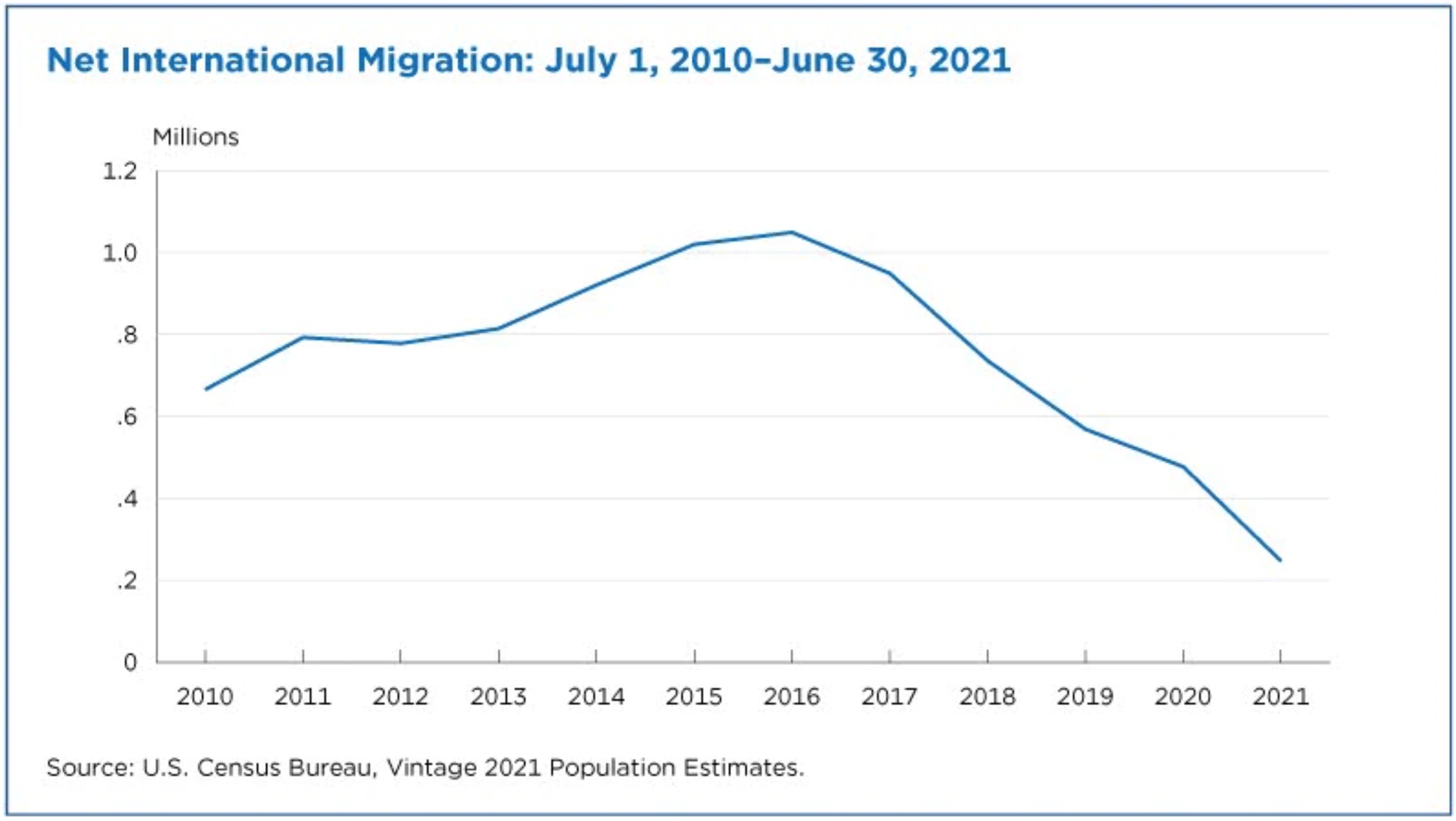 Along with retiring Baby Boomers, this can explain why the US labour force still hasn’t recovered from Covid and is hovering below its pre-Covid peak, despite an enormous stimulus effort. 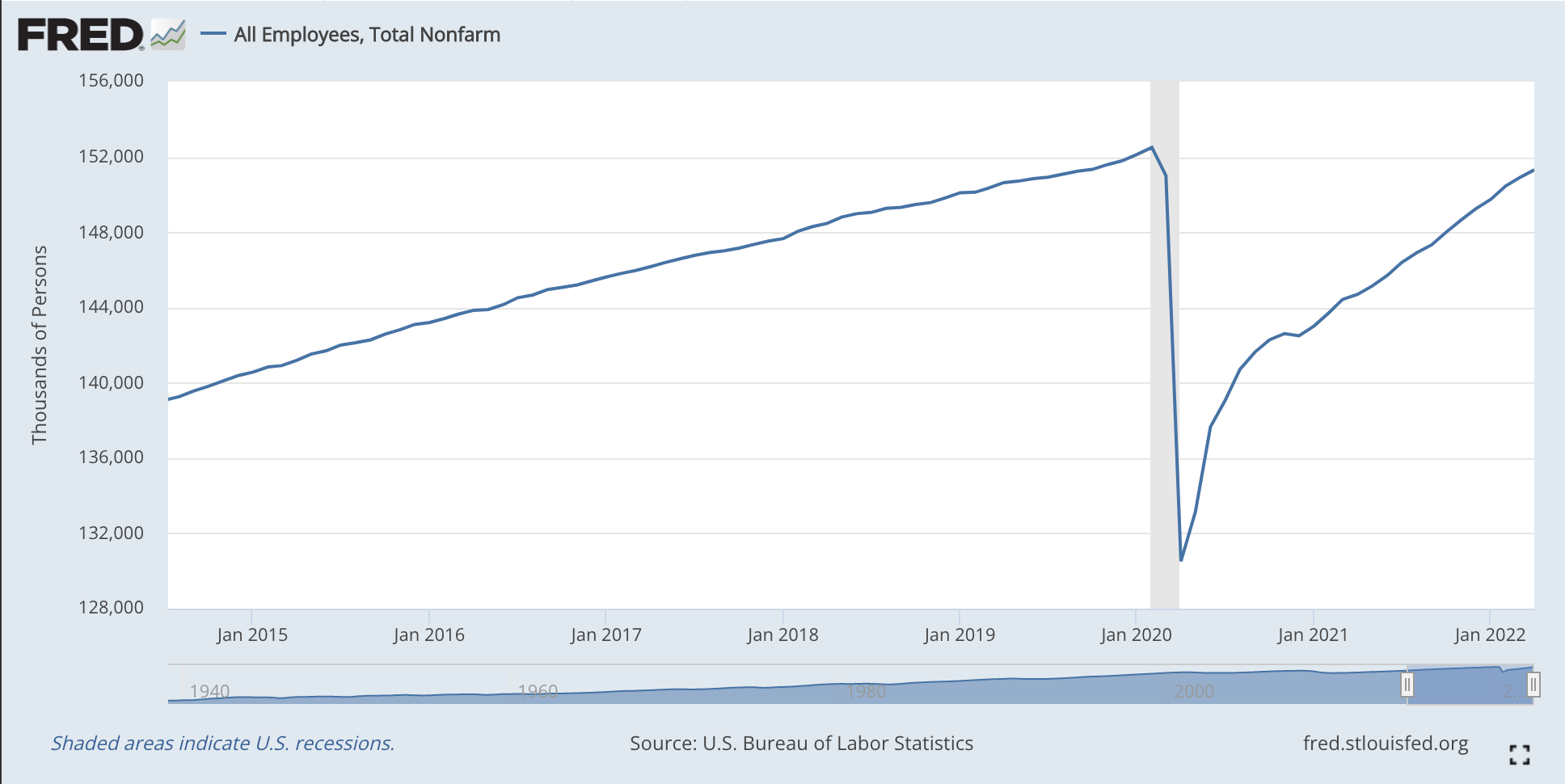 With fewer workers, there’s a limit to how many goods and services can be physically produced, restraining the supply side. It also contributes to higher labour costs (inflation) and lower economic output (recession).

inflation up, output down pic.twitter.com/NR2y8TLQ6g

Manufacturing took a hit as workers can’t produce goods from the comfort of their homes.

Ships can’t load and unload as efficiently as before, which results in shipping delays, shortages of vital parts and constraints to the rest of the supply chain.

Yet again, this keeps the inflation fire burning while the economic output is reduced.

And there isn’t much the all-powerful Fed can do about it! The Fed can only control the demand side of the economy by setting interest rates and expanding/contracting the money supply (QE), thereby impacting consumption, spending and investing. They can only throw money at the problem until the problem goes away.

But when it comes to the supply side, the Fed’s magic toolbox doesn’t work anymore.

They can’t pull some extra semiconductor chips out of their reserves. They can’t print an extra billion barrels of oil and put it on their balance sheet. They can’t build more container ships to speed up the transfer of goods from China. And unfortunately, they can’t achieve peace in Eastern Europe.

Effectively, they have a problem that money can’t fix. 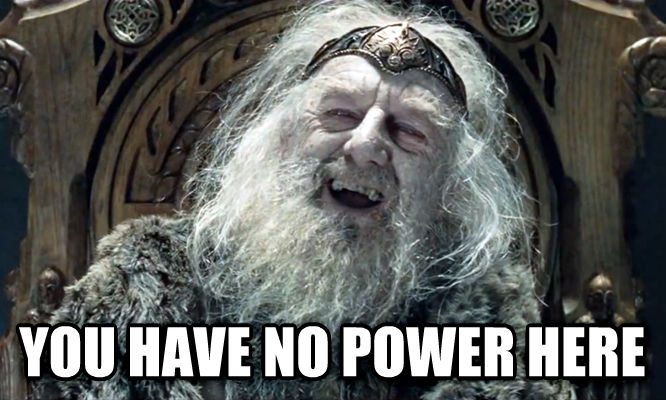 And it’s a problem the Fed is dealing with right now.

Until the supply-side issues are resolved, it’s questionable how effective the Fed’s toolkit will be at stabilizing the purchasing power of regular Americans. Right now, they are under pressure to do “something” about it, but they only know how to raise rates and print money.

By tightening financial conditions, they’re running a risk of a recession without tackling inflation. Not an easy job to do.

For more than a decade, the Fed enjoyed economic growth without inflation. Now they’re facing the other side of that coin. 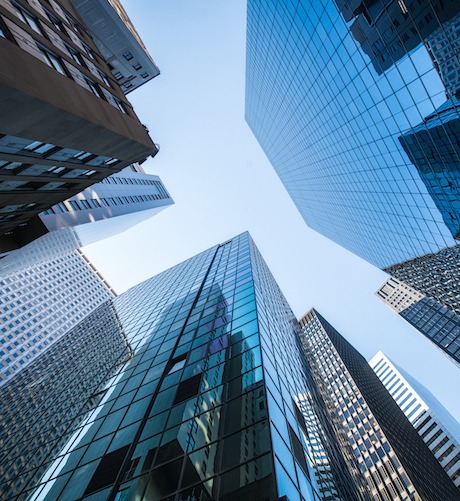